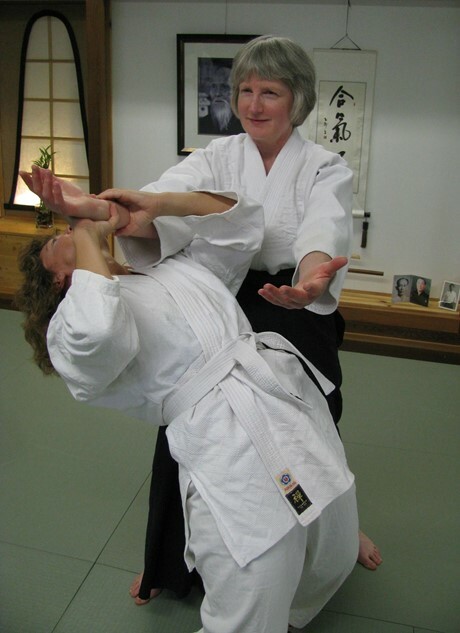 In recognition of International Women’s Day, 2022, we are pleased to honour Liz McKinlay, 5th dan, of Vancouver West Aikikai.

'O-Sensei said that “true budo is a work of love”.

What I love about Aikido is the sense of family I find in the Aikido community. You can get to know people very well in a non-verbal way.

You may not know your partner’s name, but you learn a lot about them by how they throw you and how they respond to your throws. You see their reactions to pain and discomfort, how they deal with correction or advice, their sensitivity (or lack of), their capacity to change and adapt, how they overcome discouragements, and their general level of commitment and perseverance.

No one has the time, or energy, to be phony, shy or silly. This type of non-verbal communication and involvement cuts through a lot of the male-female game-playing that is typical in mixed gender groups.

I wish that more women would stick with practice long enough to reap the benefits that Aikido has to offer on so many levels. To me Aikido is a great builder of camaraderie between people.

O-Sensei said that “aiki is … a way to reconcile the world and make human beings one family”.

I am so happy to be part of the Aikido family. '

Long-time friend and fellow aikidoist Bruce Riddick has written this tribute to Liz.

'On behalf of the BCAF, I would like to take this opportunity to acknowledge and celebrate Liz McKinlay Sensei, 5-dan, for her 40 years of contribution and dedication to the Aikido community in British Columbia and Canada.

Liz began as one of Ishiyama Sensei’s students in 1979 after 6 years of judo.  When she moved to Terrace as a 1st kyu, she opened a dojo there.  One of her students there went on to become 5th dan himself and cherishes his experience with Liz as his first instructor.

Later, Liz returned to Vancouver to rejoin Point Grey Aikikai, which morphed into Vancouver West Aikikai, where she rose to 5th dan and Deputy Dojo Cho.

To highlight a few of her specific contributions:  running the VWA children’s programme, promoting friendship and community building with her friendly and caring style, hosting numerous social events, presenting as master of ceremonies at major events, providing wise counsel to all members of Vancouver West Aikikai, and mentoring junior instructors and new students.  Aikido practitioners from across Canada have enjoyed staying at Liz and Walter’s when they visit Vancouver for seminars.

As an exemplary Aikido practitioner and instructor, she leads on the mats, using her managerial abilities for the benefit of Vancouver West Aikikai, as a former director of the BC Aikido Federation and key summer camp organizer.'